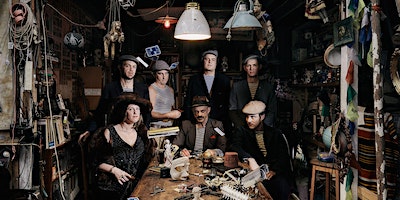 Those iconoclastic purveyors of Russian thieves’ songs, VulgarGrad, have got one more card up their sleeve before they go into hiding in Eastern Europe for an extended period. Their recent album The Odessa Job received rave reviews both here and in Russia, and they’re looking forward to slinging some new material at you at their old stomping ground the Northcote Social Club for their first gig of 2020. Fronted by Polish-born gravel-voiced ruffian, Jacek Koman, VulgarGrad are the only band in the Southern Hemisphere specialising in playing the songs of Russian thieves, Polish bums, and Jewish gangsters – beloved by taxi drivers all over the former Soviet Union. They’ll be teaming up again with the most authentic Russian ska-punk band this side of Vladivostok, Horny Elks, and Bendigo’s rogue street chansonnier, Rowan Blackmore.