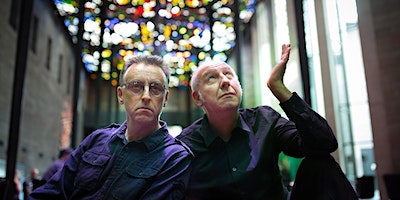 Damian Cowell - the voice of TISM - and his Disco Machine friends are joined by 2018 best Australian comedy podcast-winner, #1 Australian radio comedian of all-time and all-round icon Tony Martin in an extravaganza of party music, rapier wit, silly dancing and multi-visual karaoke madness. What do you get when you cross the Village People with Nick Cave? Radiohead with Abba? S Club 7 with Alabama Thunderpussy? We're not sure... just let Damian, Tony and the Disco Machine kick your sorrows right up the arse with a great big glomesh platform boot as they feature highlights from their recent album ‘Get Yer Dag On!’ - described by The Guardian as “a triumph” with songs that are “impossible not to quote in their entirety”. Besides: anything that involves Tony Martin doing the Nutbush just has to be seen.