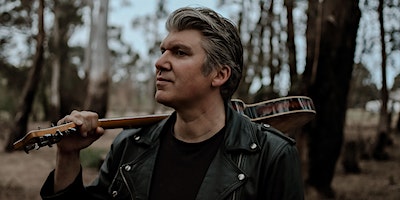 Stepping out from behind his Mikelangelo persona, one of Australia’s most compelling performers launches his debut solo album, Caravan Songs. This collection of songs, his 15 th album, encompasses an emotional scope we haven’t yet heard from the singer. Simic’s life has changed dramatically since becoming a dad in 2019. Trading touring for fatherhood has led to a greater vulnerability in his songs, and a magnified ability to speak his truth and to laugh at his own foibles.

“…while the voice and the hair are the same…Mikelangelo, it seems, has just unleashed his inner self.” John Shand, SMH

Based in the village of Majors Creek in NSW, Simic has toured nationally and internationally to widespread critical acclaim and sell-out shows, both as a solo performer, and with his long term band, Mikelangelo and the Black Sea Gentlemen, who celebrate their 20 th anniversary this year.

Caravan Songs is released via Oceanic Records and for the Melbourne album launch Simic has assembled a band of some of his favourite local musicians, featuring Stu Thomas, Julitha Ryan, Phil Collings and Dave Evans. Very special guests for the evening are Brunswick duo Anushka In The Woods, and fellow