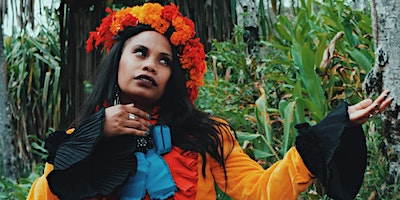 Having taken a break from performing to focus on writing soon be revealed material, the unimaginably talented vocalist will be treating fans to her unique live performances, playing Melbourne’s Northcote Social on Thursday 14 November and the Lansdowne Hotel in Sydney on Thursday 21 November.

This year has already proven to be a big one for Ngaiire, with one of her unreleased songs shortlisted for the Vanda and Young Global Songwriting Competition and the promise of more new work on the horizon, following on from the release of two critically acclaimed albums Lamentations in 2013 and Blastoma in 2016.

Ngaiire explains: “It’s been both challenging and incredibly rewarding, but this is just the beginning of a very big and all-encompassing project which we hope you’ll continue to follow. Our hearts are full to the brim with things we don’t yet have words to express.”

Hailing from the Eastern Highlands and New Ireland provinces of Papua New Guinea, Ngaiire has a career that crosses genres and art form. She has become renowned for her impressive vocal force, tight beats, boisterous costuming and big pop sounds that have seen her receive four National Live Music Awards, an FBi Radio SMAC Award for ‘Best Live Act’ and the inaugural Australian Women in Music Award for ‘Artistic Excellence’.

A multi-faceted and highly acclaimed creative, Ngaiire’s work has seen her grace the stages of Glastonbury to Splendour in the Grass, national tours alongside the likes of Sufjan Stevens, Alicia Keys and Leon Bridges, compose for dance companies and have her work performed at experimental art spaces.

Gearing up for a huge year of new music in 2020, don’t miss your chance to see one of the country’s most powerful vocalists live on stage this November and be one of the first to catch a glimpse of what’s to come.