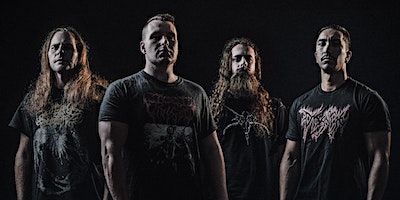 In their 10th year since conception, Disentomb has emerged as one of the most unique and dynamic bands in modern Death Metal. The Brutal Death Metal band has forged a completely unique sound, combining frenetic blasting brutality and bleakened dissonance into a force that sounds like no other. Their long-awaited third album The Decaying Light features 13 tracks of doomed out brutality, undoubtedly their most accomplished work to date.

First bursting onto the international touring scene with their debut Sunken Chambers of Nephilim (2010) and sophomore album Misery (2014) Disentomb has solidified themselves at heavyweights of the genre playing hundreds of shows throughout Europe, the United States and Asia alongside some of the biggest acts in Death Metal.

With new material and a sharpened live show, the four-piece will take their high-energy and visceral performance to five Australian cities in July to showcase a new era in a band that has cemented themselves as a band not to miss.