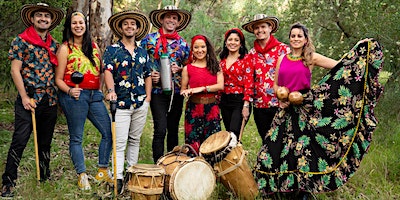 This family friendly explosive afternoon will take you into a tropical land of traditional music, dance and performance from the Caribbean and the Pacific coasts of Colombia, in the drumming and jamming hands of La Descarga with special guests and supported by The Electropical Orchestra and Sabrosa Sound System DJs (Brisbane).

Cumbia music, inspired by the heartbeat, mixes the colour and spirit of Latin America, with the soul and feeling of Africa, and the passion and lyricism of Spain. It was born in Colombia, and continues to spread around the world, being recognised by many, as having the most infectious rhythm. Since 2010, La Descarga has been the forerunner and preserver of the cultural heritage and folk of Cumbia in Australia. La Descarga has played in many of Australia’s most recognised festivals including MOOMBA, Port Fairy Folk Festival, Darwin Festival, Brunswick Music Festival, Australian Multicultural Festival, White Night Melbourne, Reservoir Stomp and Darebin Music Feast.

Expect a one-of-a-kind performance in Melbourne, with everlasting drumming, coastal visual projections, and first-hand experience with ancestral rhythms and sounds.

And remember, forget about the siesta and get down to the fiesta!