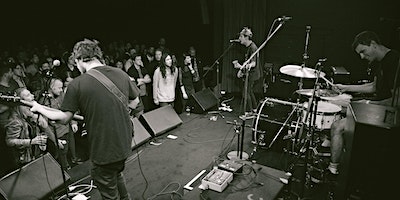 This show is getting rescheduled. New date to be announced soon.

Message from the band:

Hey gang, news as you probably expected. We are postponing the tour until further notice, due to covid-19 restrictions. We will keep you in the loop of new dates etc and plan on honouring the venues we had booked. Refunds will be available at point of purchase for anyone who bought tix, or hold on until new shows.

Until then, go and buy a heap of stuff off bandcamp, stream bands all day/night and go visit record stores..

Look after one another and please stay safe. Big love, FOLEY + YEAHH NAHH

After a much deserved break from touring, career changes and a newborn baby, Foley returned to the familiar setting of Northcote’s Soundpark Studio in mid 2019. Working with Andrew “Idge” for a third time round was a no-brainer and smooth process, honing further in on the “simple, earnest and raw” songwriting by frontman Mick Porter.

Two years on from the release of their sophomore album “Hey, Don’t Worry About It,” Moley provides the heavily infectious hooks and heart warmers you’ve grown to love, although stand alone this record feels sharper, brighter and honest to the core. “The Trilogy is complete” according to the band.

Joining the band in the studio were several guests and talented close friends, including Andrew Casta (of The Berkeley Hunts), Jamie Kemp and Jerome Knappett (of The Flying So Highos), on tracks including “Me Vs The Young Jay Z...” as well as “Cute without The T.” Dave Romero also assisted setup/tracking in the studio and the record was mastered by Carl Saff at Saff Mastering, Northwest Chicago.

“I’m less familiar with FOLEY! than I might like to be. If that’s you, or ever has been you, then this album’s something to singularly wrestle you over to their side” – One Shots

“Like the rest of the immaculately-titled album by Foley! (“Moley!”), this is so much fun it’s hard to shake off. Keeping everything simple pays off in spades, shovelling smiles on top of smiles with every Wedding-Present-y beat. It’s a blister but it creates grins the size of dinner plates.” – Underground Stage