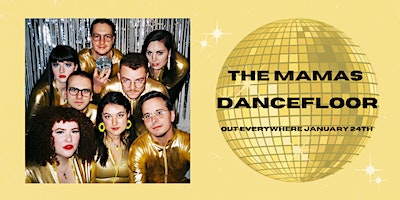 Feeling a bit… lost? Confused, perhaps? Lurching through life with no direction, low on Vitamin D, and in desperate need of a soothing, maternal smack in the head? Well, first of all, it’s time to stop carrying on like a pork chop - Melbourne’s The Mamas are BACK with an alarming new live show, filled with the fabulousness, ferocity, killer vocals and risqué antics that crowds across the country have come to know and love.

The past three years have seen this eight-piece act earn a reputation for their unique blend of soul, RnB and funky fem hop - they’ve quickly become known for their sequin-studded shows and knack for toeing the line between social commentary and outrageous comedy. Led by four of the sassiest vocalists you’ll ever meet, The Mamas are a feast for the senses and an invigorating tonic for those in need of a good dance (and a good laugh).

After a juicy year which saw them release the music video for their song Banana Club and play to thousands at this year’s Queenscliff Music Festival, The Mamas are poised and ready to celebrate the release of their most recent single ‘Dancefloor’, with a much-awaited tour. Rumour has it that this string of shows will feature some startling new material, freshly-birthed and never heard before until now - you'll have to see it to believe it. Gird your loins, DON’T answer back, and get yourself to a Mamas show as soon as you can! Delicious supports, set times, and more information to be announced soon. Mark it in your diaries, tell your friends, grab your chix, and DON’T miss out. See you on the dancefloor!Prepare your ears in advance. Listen to 'Juicy', the debut EP by The Mamas, here: https://spoti.fi/2rlJ1wp

We would like to acknowledge the Traditional Custodians of the land on which this event is held, and pay our respects to their elders past, present and emerging.