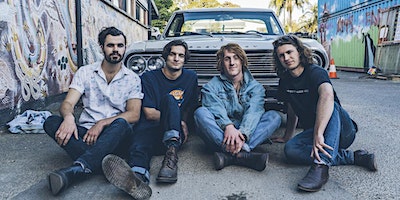 You don’t want to miss out on sunbleached Brisbane-based outfit Shag Rock.

The indie surf-pop 4-piece have plenty to smile about, fresh off the steam train of 2018; touring throughout regional Australia with The Rubens and Tia Gostelow, as well as making waves in New Zealand. Amassing 14 million streams internationally and constantly growing their shaggy family of fans - 2019 hasn’t dimmed the spotlight either.

Since the release of their debut full length album ‘Barefoot’ (2017), Shag Rock have toured the USA and embarked on multiple headline tours across sunny Australia. Following this success, they have released two singles ‘Double Life’ and ‘Fuzzy Connection’ (2018) which have evolved into full-blown party anthems.

The group have had their heads buried in the lyric books. Working with producer Ian Haug (Powderfinger, The Church) and signed to Airlock Records they couldn’t be more excited to share their new sound in their upcoming single ‘Old School Lover’.

The band are ready to celebrate their new release as they prepare for another mammoth national tour to cap off their stellar year. Their endless tours prove they can turn any venue into a pulsing party, and with new tunes but the same old buffoons - you can’t help but get excited for a new wave of Shag Rock.