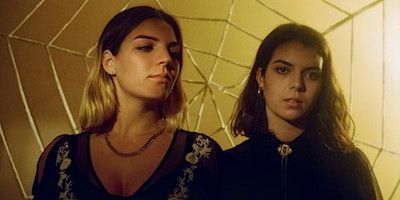 CLEWS have announced they will be taking their dazzling live show on their biggest headline tour to date this October & November. Presenting The Spooky Pageant Tour with special guests Eagle Eye Jones & more, this isn't one you will want to miss.

Having wowed audiences around Australia with their explosive live show and touring the country with the success of their singles “Crushed” and “Museum”, Sydney duo CLEWS recently returned with their latest melody-drenched masterpiece, “Hollywood”.

It’s been an exciting 18 months for the sisters from Mollymook. CLEWS have quickly carved out their own unique take on contemporary indie music. With an extensive amount of touring under their belt including supports for the likes of Portugal. The Man, Laurel, Albert Hammond Jr. and Ocean Alley, premiere national festivals and more recently their own headline shows, CLEWS are now poised to take their soaring vocal and guitar harmonies to the world.

After their last headline tour sold out in advance earlier this year, we recommend getting your tickets for The Spooky Pageant Tour as soon as possible.