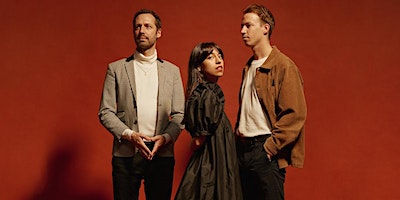 Melbourne three-piece Telenova have announced their debut EP ‘Tranquilize' will be released Friday 2nd July via Pointer Recordings / Remote Control Records. To celebrate the EP release Telenova will return to Sydney and Melbourne after their sold out 'Bones Tour' earlier in the year, as well as playing debut shows in Brisbane and Adelaide.

Assembled by Chris Walla (Death Cab For Cutie) at an APRA SongHubs writing camp in early 2020, Telenova combines the alluring vocals of multi-disciplined creative Angeline Armstrong, alongside the refined musicality of Edward Quinn (Slum Sociable) and Joshua Moriarty (Miami Horror). With an air of quiet confidence, thanks to their self-directed cinematic aesthetics and trip-hop influenced production, Telenova trade in a sound that’s unequivocally Melbourne yet global in scope.

The EP announcement follows on from Telenova’s debut singles - ‘Bones’ and ‘Tranquilize’, both of which have found remarkably strong support from media, music platforms and radio alike. 'Bones' has remained in the Top 50 most played tracks on triple j since release, and still sits in Shazam’s Australian Top 50 chart, and both singles have seen consistent support from community radio across the country.