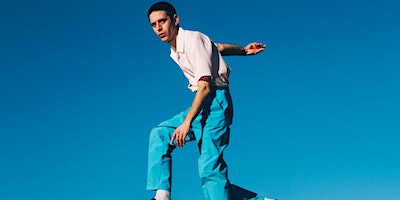 Melbourne’s Ryan Downey has announced the forthcoming release of his luminous new art-rock album, A TON OF COLOURS, out May 14 via Dot Dash Recordings.

To celebrate the announcement and the release of the first single ‘Heart Is An Onion’, Downey and his band will be touring Victoria and NSW this April to share songs from

the album for the first time. Downey’s sound is a vibrant affair – musically, stylistically, and vocally. His astonishing voice often raises comparisons to the all-terrain vocals of Bryan Ferry and David Bowie. A TON OF COLOURS is a bold and playful record underpinned with raw sophistication. The album was produced by Burke Reid (Courtney Barnett, Julia Jacklin), who brings an electrifying heft, depth and genuine emotion to Downey’s songs, with nods to the re-defining guitar records of Anna Calvi and Big Thief. Downey’s first single ‘Heart Is An Onion’ is a surreal, existential roller coaster ride towards hope and compassion.

Following sold-out headline shows in Melbourne, Brisbane and Sydney, tours locally and abroad with artists like Marlon Williams, Sarah Blasko and Emma Louise, performances at MONA, Melbourne Recital Centre, Falls Festival, Bigsound and more, these shows are not to be missed.