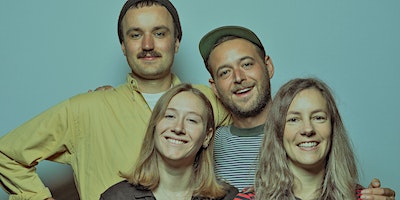 Sam, Bella, Michael and Holly are Quivers, a band which make cathartic guitar pop that jangles and shimmers somewhere between 1980s Australia and 1990s America and somehow sound like the present. Started in Hobart before moving to Melbourne, the band first toured their life-damaged but hopeful debut, We'll Go Riding on the Hearses (Hotel Motel Records) around Australia, Canada and NZ. It lyrically deals with love and loss after losing a brother in a free-diving accident. It found its way to NPR’ Music's cult-favourite All Songs Considered who said it “turned an unimaginable tragedy into a celebration of spirit that ranks among the year's better rock albums”. NPR named Quivers a Slingshot Best Emerging Artist and put next single ‘You’re Not Always On My Mind” on their Austin 100 SXSW preview. KEXP’s John Richards described it as one of the best he’d heard “in years” and invited the band to perform a filmed live session in their studio. The song went on to be his most played song of 2019. All this helped Quivers’ 2019 trip to SXSW be a really good time. It also led Seattle label Turntable Kitchen to commission the band to record a song by song re-imagining of REM’s Out of Time album, which came out in October 2020.

Live, Quivers are in their element. Austin 360 described the band as “evidence of Australia’s strength at the (SXSW) fest this year, a co-ed act … with instantly memorable choruses and a vocal sweep that sometimes included all members singing”. So far the band has performed at Dark MOFO, Panama, By The Meadow, Mullum & Grampians Music Festivals, as well as supported Holy Holy, Angie McMahon, Cloud Control and almost Rolling Blackouts CF for Brunswick Music Festival (cancelled due to Covid-19).. Heavy cut ‘Videostores’ was released before SXSW2020 that never was, and our return and first 21-date tour of the USA was cancelled due to Covid-19. We shouldn’t have written a chorus that goes “now I know, the future starts slow, moving through molasses as your walking me home”. Without being able to tour, Quivers has bought a heap of analogue recording equipment and focussed on new material. We are getting ready to release our 2nd album.