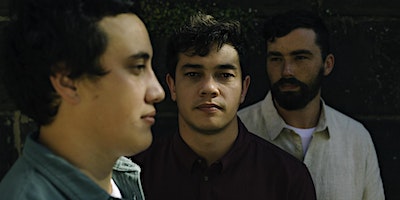 After a few years of hiatus, Melbourne’s favourite buskers Woodlock are returning to the stage for one night only, to launch their highly anticipated debut album ’The Future Of An End”.

New Zealand-born brothers Zech Walters (guitar/vocals) and Eze Walters (guitar/vocals) struck up a friendship with Bowen Purcell (drums) after moving to Australia. In search of adventure, the three travelled around the country busking, before eventually settling in Melbourne. Woodlock’s international profile kicked off with headline tours through the Philippines, China, and Canada off the back of standout single “Something Broke That Day.” Simultaneously, the title track of their Sirens EP reached iTunes Top 50 charts and Top 10 spots on Spotify’s viral charts globally.

Now signed to Nettwerk Records, the trio has been recording new music over nine months in a variety of locations – from Bowen’s garage to Homesurgery Recordings in Melbourne – and working with producers Hayden Calnin (Didirri, Harrison Storm, and a solo artist in his own right) and Jackson Barclay (Vera Blue, Winterbourne, Timberwolf). The new music – a dynamic mix of organic, acoustic elements and electronic flourishes – is a breathtakingly candid collection of songs about heartbreak, trauma and hope.