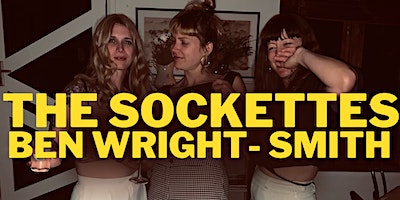 Local gals The Sockettes are jumping back on stage with Abe Pedroza on drums after nine months of lockdown making songs that reflect the intimacy of conversations between friends. After releasing their debut album Wendy's Place in the midst of the chaos, Alice, Méabh and Leah are ready to share love and longing through classic folk and three-part harmonies that are transportive and nostalgic yet pertinent to today.

They'll be joined by Melbourne singer-songwriter and musician, Ben Wright-Smith and his band, leading up to the release of his second full-length album ‘Echo Lodge’ (to be released in late Feb 2021). His is an act not to be missed!