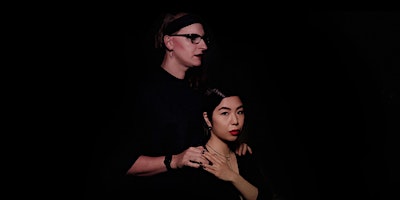 SaD are Daphne Camf of NO ZU on vocals and synth with Simona Castricum on guitar and programming.

Together, the two pay romantic homage through dark and minimal waves of crooning lamentations and danceable vulnerability.

Their debut album 'Saturn Rules The Material World’ released deep within Melbourne’s 2nd lockdown still managed to receive Album Of The Week on Melbourne’s 3RRR and Brisbane’s 4ZZZ, featuring the singles ’The Poets of Antiquity’, ‘Don’t Go’, and ’Sign From Above’ —

FINALLY, as Melburnians emerge from their houses ready for live music again, SaD will launch 'Saturn Rules The Material World’ on vinyl. Out now through Trans-Brunswick Express.

Hunny Machete (ex_HABITS): Hunny Machete is the heart-child of HABITS allum Angel. A merging of metallic avant-pop production with brutally sincere songwriting, sung with a quietly forceful fragility. Soon to be releasing their debut self-produced EP, Hunny Machete are set to establish themself as a unique voice in the queer experimental pop canon.

This event takes place on Wurundjeri Country of Kulin Nation.